Wills for Non-Muslim Foreigners in the UAE 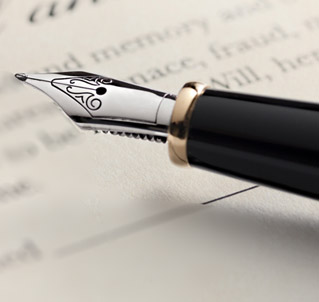 Section (4) of the UAE Personal Status Law regulations, Articles (240) to (272), and the most significant provisions thereof stipulate that the will shall be enforceable within the limit of one-third of the testator’s estate, after the performance of the rights thereon, and shall be valid beyond the one-third within the limits of the share of the heirs who accepted it.

The will has aspects that must be available, otherwise it shall be deemed void; namely (the wording, the testator, the legatee and the bequeathed property), and that it is permissible for those who have the right to possess the bequeathed property, despite the difference in religion; it is permissible to legate non-Muslims, the poor, the needy, schools, orphanages, etc., but it is not permissible to legate the taboos such as liquors, etc.

In addition, as per the provisions of Article (272) regarding the mandatory will of whoever dies, or is considered dead by decision of the court, and has a son or a daughter who died before or with the testator; the grandsons shall be entitled to a will for one-third of the estate within the limits and conditions thereof.

The need of Non-Muslim foreigners to write their Wills:

In accordance with the above-mentioned, the basis is to apply the provisions of the UAE Personal Status Law to all UAE Nationals and foreign residents. However, if foreigners adhere to the application of their law, in this case, this law should be applicable, provided that a duly authenticated copy thereof is submitted, even if its provisions are not in accordance with Islamic Sharia, provided that the parties to the dispute shall be non-nationals and non-Muslims.

With regard to the applicability of foreign law in the UAE in relation to the will, if it included or contained property owned by a testator within the UAE, the UAE legislator in this regard made an absolute prohibition and decided that the applicable law in such case shall be the UAE Law only.

Based on the foregoing, sometimes the distribution in accordance with the principles of Sharia has some surprising and unexpected effects on non-Muslim foreigners.

Recently, and based on real examples, there has been some ambiguities and problems facing the non-Muslim foreigners in the execution and application of the will in the UAE. Thus, for the purposes of achieving justice and equality and to bring them peace of mind, especially when they conduct an act concerning their own funds, the UAE has made laws and resolutions that apply to all the wills and estates of non-Muslims to enable them to prepare their wills within an explicit legislation that ensures the application of their own laws and the development of litigation procedures for their wills and estates, to simplify and make them enforceable. Moreover, this helps foreigners register their wills and manage their estates in the country by stating the legal matters related to issues of inheritance and estates and finding appropriate solutions thereon and encourages their investment in the UAE with confidence and transparency.

These resolutions are part of the efforts of the United Arab Emirates towards the establishment of an institutional infrastructure dedicated to the values of tolerance and acceptance of others, in line with the legislative structure of UAE law and the community culture that characterizes the UAE nation.

In addition, the commitment of the UAE to the continuation of success and progress, and the achievement of justice system in a manner that best satisfies the aspirations of those residing in the country, His Highness Sheikh/ Mohammed bin Rashid Al Maktoum, Vice President and Prime Minister of the UAE has issued Law nº (15) of 2017 regarding the administration of non-Muslim estates and the execution of their wills. Furthermore, His Highness Sheikh/ Mansour bin Zayed Al Nahyan, Deputy Prime Minister, Minister of Presidential Affairs and Head of Abu Dhabi Judicial Department, has issued a resolution to establish the non- Muslim Wills and Probates Office.

Non-Muslims in Dubai did not have the right to write their wills. However, as of October 1st, 2010, the Notary Public of the Dubai Courts became the governmental authority that provides ratification service for the signature of the writer of non-Muslims’ will, having been ratified by consulates and embassies of concerned persons and some private offices licensed in some free zones only.

His Highness Sheikh/ Mohammed bin Rashid Al Maktoum, Ruler of Dubai, has issued Law nº (15) of 2017, which clarifies and amends legislation on the administration of non-Muslim estates and the executions of their wills.

Thanks to the new law recently issued, non-Muslim expatriates, residing in the city, can write long-term wills in English recognized by the Emirate.

Whereas, “the law, which applies to all non-Muslims’ wills and estates in the Emirate of Dubai, including the Dubai International Financial Center, aims to enable non-Muslims to prepare their wills within explicit legislation that ensures the application of their own laws”, in accordance with the official statement.

The decree clarified the legal procedures for their wills and estates, simplifying and making them enforceable; moreover, to encourage them to register their wills and manage their estates in the Emirate of Dubai by stating the legal matters related to issues of inheritance and estates, and finding appropriate solutions thereon. In accordance with the law, the “Register of Non-Muslims’ Wills” shall be established in both Dubai Courts and DIFC Courts, specifying the form of the register, its statements, and the registration procedures and regulations shall be determined by a resolution of the President of both Dubai Courts and DIFC Courts.

It is intended to give freedom to non-Muslims to choose the appropriate way to write their will and how to dispose their property after their death. A special register has been established to register these wills and estates and to consider all the issues related to the execution of the registered wills, regarding the estates and properties located within the Emirate of Abu Dhabi, of residents and non- residents, with the possibility of registering the wills in English. The office also offers flexible legal options to assist non-Muslim families, in the event of the death of their father or mother, to protect assets and properties, in the Emirate of Abu Dhabi.

In conclusion, due to the diversity in the nationalities and religions of the residents in the UAE, at Hussain Lootah & Associates we recommend non-Muslim foreigners to seek a professional legal consultancy with experience in the UAE law, prior to the preparation of the will.